What is a VPN? – VPN Connection Types – Why should I work with a VPN connection?

VPN connections can be used in many cases. In this article we will detail the meaning of a VPN connection, its main uses and why you should use them.

A VPN (Virtual Private Network) connection is how its name indicates a virtual private network.

To get through the Internet, without other users being able to access their data, they created a virtual connection or “tunnel”. Within this VPN tunnel, the data is encrypted from origin to end. So, if we are talking about a VPN connection between routers (Site-To-Site) the encryption of the data is done by the routers, from end to end. In this way, data could be sent without the Internet provider or anyone else being able to intercept or view it.

What is a VPN tunnel?

The VPN tunnel is where encrypted data passes through VPN connections. It is called a VPN tunnel because it is really like creating a tunnel through the internet to connect to the other side of the VPN.

There are several types of VPN today. There are basically three types:

Site-to-Site VPNs are those that connect 2 communication devices. They basically allow you to connect virtually 2 geographically separate sites where both have their own Internet connection. The equipments in charge of creating this type of VPNs are usually: router or firewalls.

VPN clients are used to connect basically PCs or other end devices (Printers, IoT, sensors…) to a central headquarters or single central point. These connections are used for teleworking. Although they are becoming famous for bypassing restrictions of operators, governments or exclusive services for countries of origin. If you have a Fortigate firewall, you can consult the article How to configure a VPN with Fortigate in 3 easy steps? that we wrote some time ago.

VPN connection software or programs are used for this type of connection. Through its specific configuration, the VPN is connected. Once the connection is made, we can use any program from our computer. 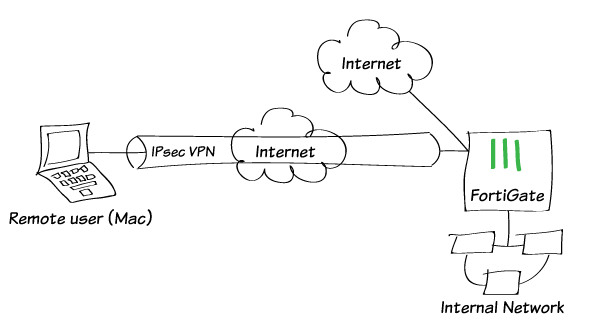 Web VPN connections are the most modern. They consist of company service connections, basically adding security and ease when connecting with company resources. It is not necessary to install or configure any program or software to make VPN connections. Simply accessing a Web and with a username and password, we will have the Web VPN connection to access internal resources of the company easily and securely.

What are VPN connections for?

There are several uses for VPN connections. Here are the main uses:

VPN connection between sites or remote offices through their Internet connections

Another of the most widespread uses among businesses is VPN connections for teleworking. These add security to the remote connection. They also allow the worker to access the company’s services and infrastructure as if he were inside the company. Using VPN connections is as if the workers were physically in the company, connected by cable or VPN.

Avoiding geographic censorship is another use that is making VPN connections a commonplace. There are many services that offer VPN connections to access Internet resources censored by governments and Internet operators. These companies allow through the VPN connection to consult censored or blocked resources, as they give access to the Internet through other countries where these resources are allowed. Consult this article from how to avoid blocking websites in the referendum of Catalonia through the VPN service of Opera.

These geographical blocks are not only for censorship, but for conditions of service, for example on TV or network television. If you have contracted Netflix in Spain, but you are travelling abroad, you will probably not be able to access your contents, as you are accessing from a country with different conditions. This happens with a lot of paid digital content services.

The same happens with operators or streaming services. Many operators around the world block P2P downloads, even if they are legal files. With VPN services we will be able to connect without problem and use P2P technology to download or share files. Another normal use is to access your Streaming or TV services over the Internet.

One of the techniques used by hackers or activists to maintain the anonymity of their connections is the use of VPN connections. Through a VPN network, they jump from country to country and hide in these services. They help to maintain anonymity or the origin of connections or distributed attacks.

Why do you have to use a VPN connection?

Have you ever wondered why I have to use a VPN connection? If this is the case it must be because someone has told you about it or you have heard that with a VPN you could do many things.

Are you a company and still don’t know why you should use a VPN connection?

If you are a company that has resources used by your workers such as file servers, printing services, connections to TSV servers, you need a VPN connection. Why?

If you have several locations, you can be sure that you are using a VPN service to connect to them. From Moving-IT we can help you to configure these connections.

In future articles we will go deeper into how to configure a VPN connection and which equipment or services are the most advisable.

Thank you very much and see you for the networks…